This Canberra composting service is keeping food scraps in the community

This Canberra composting service is keeping food scraps in the community

Capital Scraps collects residents’ food waste, composts it through one of their composting hubs and returns the high value fertaliser back to the community.

One in five grocery bags bought in Australia goes to landfill. The lack of oxygen in landfill means that this food waste produces methane as it rots, a greenhouse gas 25 times more harmful than CO2. The solution to this problem seems obvious: turn food scraps into compost. But this process isn’t always easy, especially if you are time-poor, live in an apartment or, like me, have a black thumb.

Community composting groups like Canberra’s Capital Scraps are stepping up to provide expert, efficient, locally tailored solutions to our food waste problem. Founded by biochemical scientist Brook Clinton, the kerbside scraps collection service allows residents to outsource their sustainability to the experts. Each week, Brook and her team cycle around their community collecting food scraps, composting them and returning this high value product back to the earth.

We sat down with Brook to talk about the art and science of composting.

Planet Ark: What is your background and how did Capital Scraps come to be?

Brook Clinton: I guess you could call me a bit of a frustrated scientist. There's lots of us out there. I trained as a scientist, got my PhD, worked in research for a little bit, covering quite a few different topics in biological research in general but with a focus on microbiology and biochemistry. Even while I was researching other topics, I kept on coming back to the idea of compost because it's so amazing in its abilities to transform what we think of as a waste stream into something that people really value. Every gardener will tell you how much they love good compost. As soon as you use it, you can see the benefits.

We know there's a massive amount of food waste going to our landfills, that's where my frustrations as a scientist as well as someone who's interested in preserving our environment comes in. I started [Capital Scraps] because I wanted to apply the scientific knowledge that I knew could help. A lot of people have tried composting and have a composter in the back corner of their yard. But it's still a bit of a black box for some people, a bit of a mystery. And sometimes it doesn't go exactly the way you want it to go, doesn't go as fast as you would like it to go and some people, rightly, just kind of give up after a little while because it doesn't seem to be doing much. But there is a huge potential there. 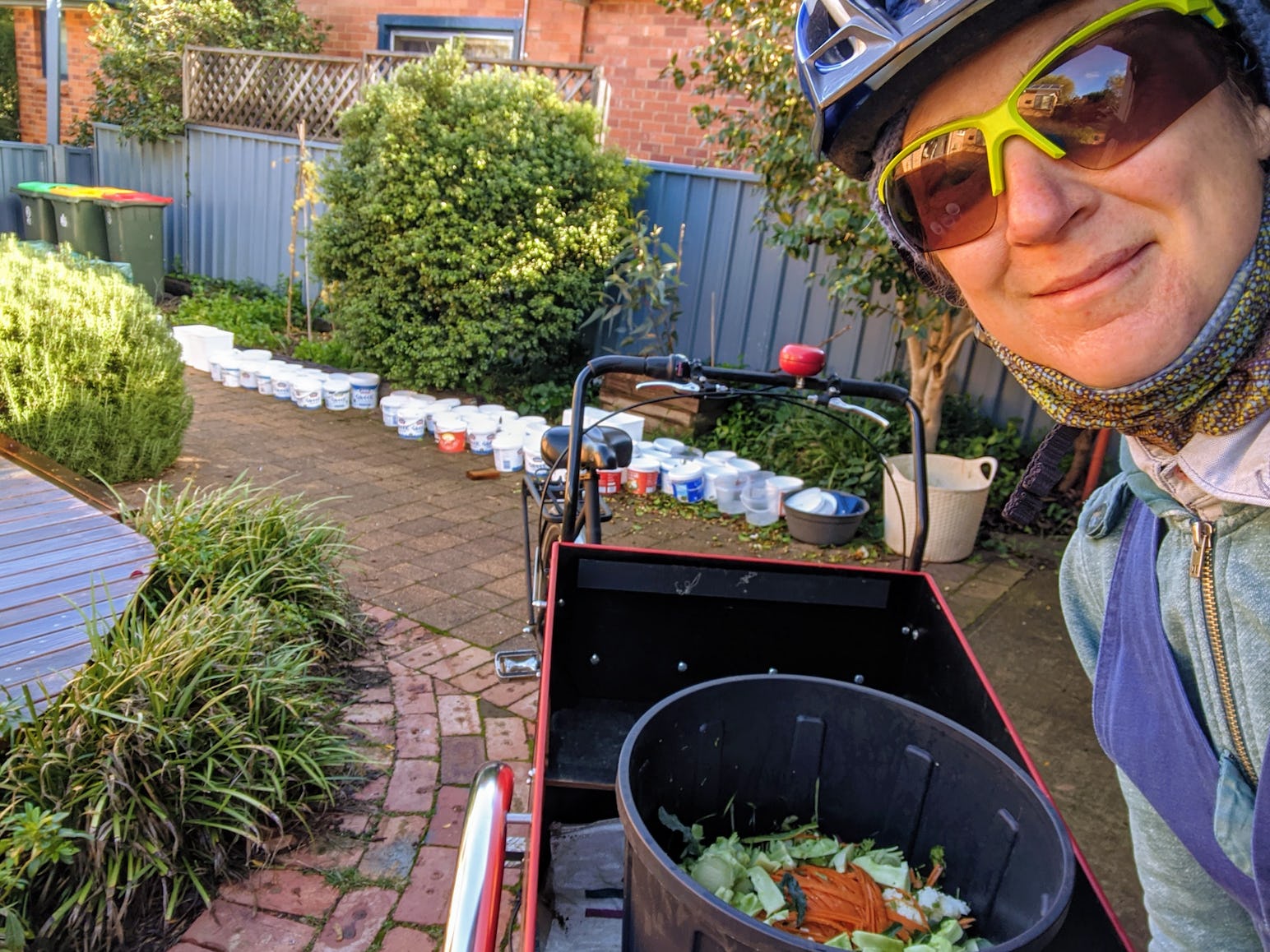 What does Capital Scraps do?

In a nutshell we are a scraps kerbside collection and processing service. The idea is that you, very similar to how you put your bins out on the curb, fill a bucket throughout the week and put that bucket out once a week. And then we'll come around and swap those buckets over for clean ones. And we do that on bikes. Our main goal actually is not even so much the recycling, it's actually the climate action part of it. So, we're driven by avoiding the methane that's generated in landfills. We don't really want to do that by petrol powered vehicles, if we can help it, and the bikes are perfectly suited to zipping around the suburbs.

Then, we bring the compost to one of our composters where we consolidate the scraps together in a larger amount. And that's how we get some of our efficiency as well and how we're able to do hot composting as opposed to the slower cold composting. We've got the composters spread kind of haphazardly throughout the suburbs and we're going to get some more built. So, it's going to be this interconnected network of composting hubs. One of those can on a continual basis process at least 80 households worth of kitchen scraps, if not more.

We've grown to the point where I have a little team of casual staff members and we're starting to collect the scraps from households all over the inner north of Canberra. Lots of places have government-run schemes, and we're going to have one here in the ACT in 2023, but what we do is put [composting] right there in the local suburbs, having the composters be on view so that people can slowly gain a respect for the process. 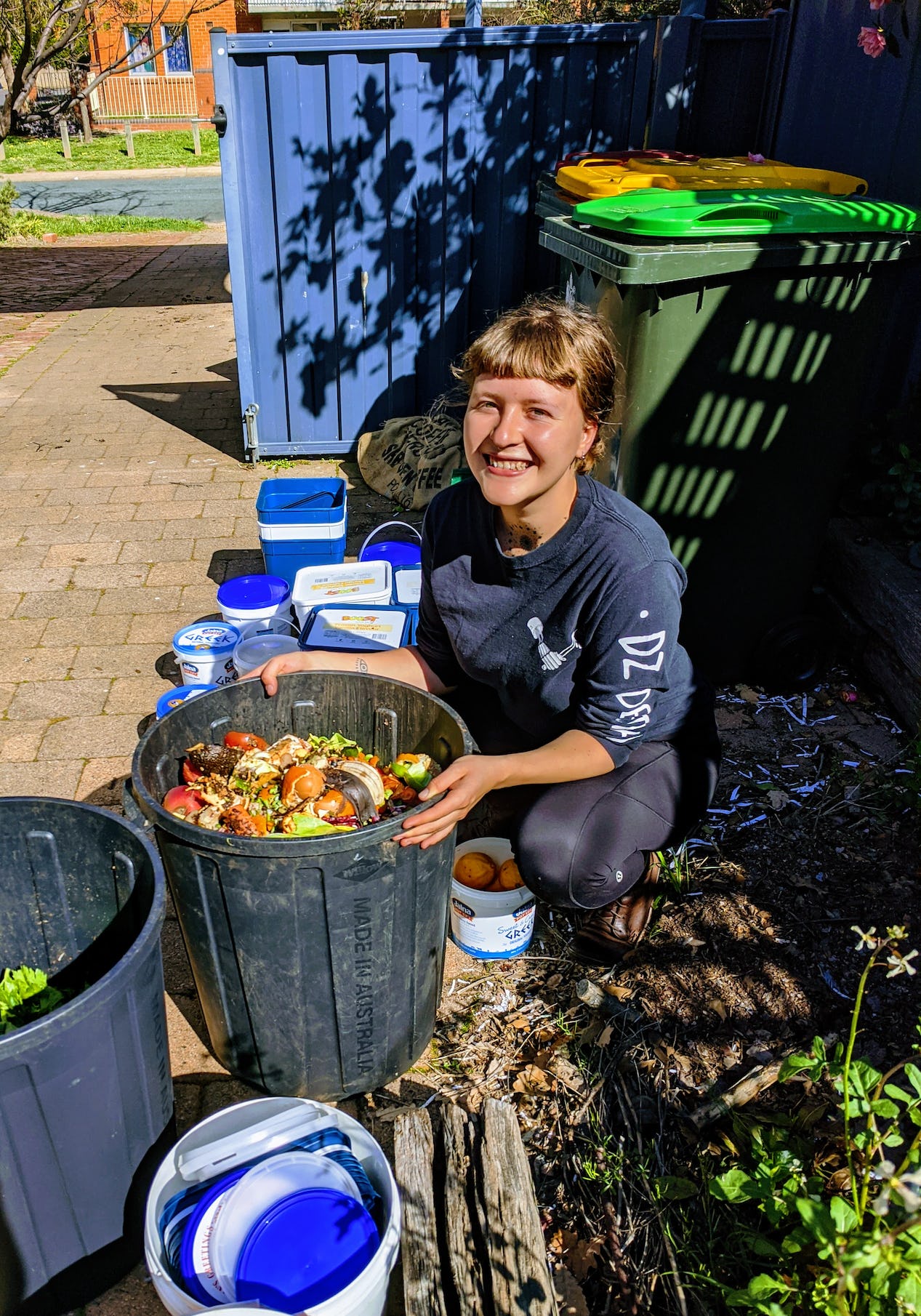 What is the chemical process that goes on inside a compost heap?

It's super complex in terms of the biology. There's thousands of species of bacteria in there and they're all battling with each other and competing and then, because of that, there's all this chemistry going on. Those chemical reactions that are occurring can produce some really high value products. We should be really looking into those processes a bit more.

You can get a lot of products these days made out of compostable plastic and they're made out of something called polylactic acid. That molecule is built with the same lactic acid that you find in milk that some people are allergic to, but it takes a little bit of complicated biological engineering to turn it from its raw state into what looks like normal plastic. That's the kind of chemical transformation that we should know more about so that we have better products that are not damaging to the environment or causing other problems.

In terms of new materials and having things that are more easily recyclable because they're closer to biological products, there's a lot of science that could be done. A compost heap is not a natural thing, it's actually a bioreactor. It’s a human-managed process because we have a lot of different processes that are occurring — checking what's hot at what time, what's too dry, what’s too wet — and that's all modulating the environment. There's huge potential there for better recycling of things into futuristic products.

In terms of climate action, why are community initiatives like Capital Scraps so important?  I think, as an individual or an individual household, you can easily dismiss the scale of the problem. So, for instance, if you're throwing out a bit of food waste every week, you're like, ‘Oh, whatever, it's just a cabbage or it's just a few apples’. But once you join up with other like-minded people and get a bit of a community feel around it, you realise that you can achieve more together. And I think that's what we need.

We've had government agencies telling us that we should compost our food waste for, what, 40 years or more. And they still just say, 'Oh, it's easy. Everyone should compost because it's easy’. And that's kind of a relative comment, yes, it's easy, but it's not easy if you don't have the time to turn your mind to it. So that's where, if we do if we do things like community composting, you don't really have to add it to your mental load. You don't have to understand the ins and outs of worm farming. You don't have to do all that learning. You don't have to do the troubleshooting if something goes wrong, and you end up with a stink bomb or something, you can let someone else do that. You can outsource your sustainability to the community. 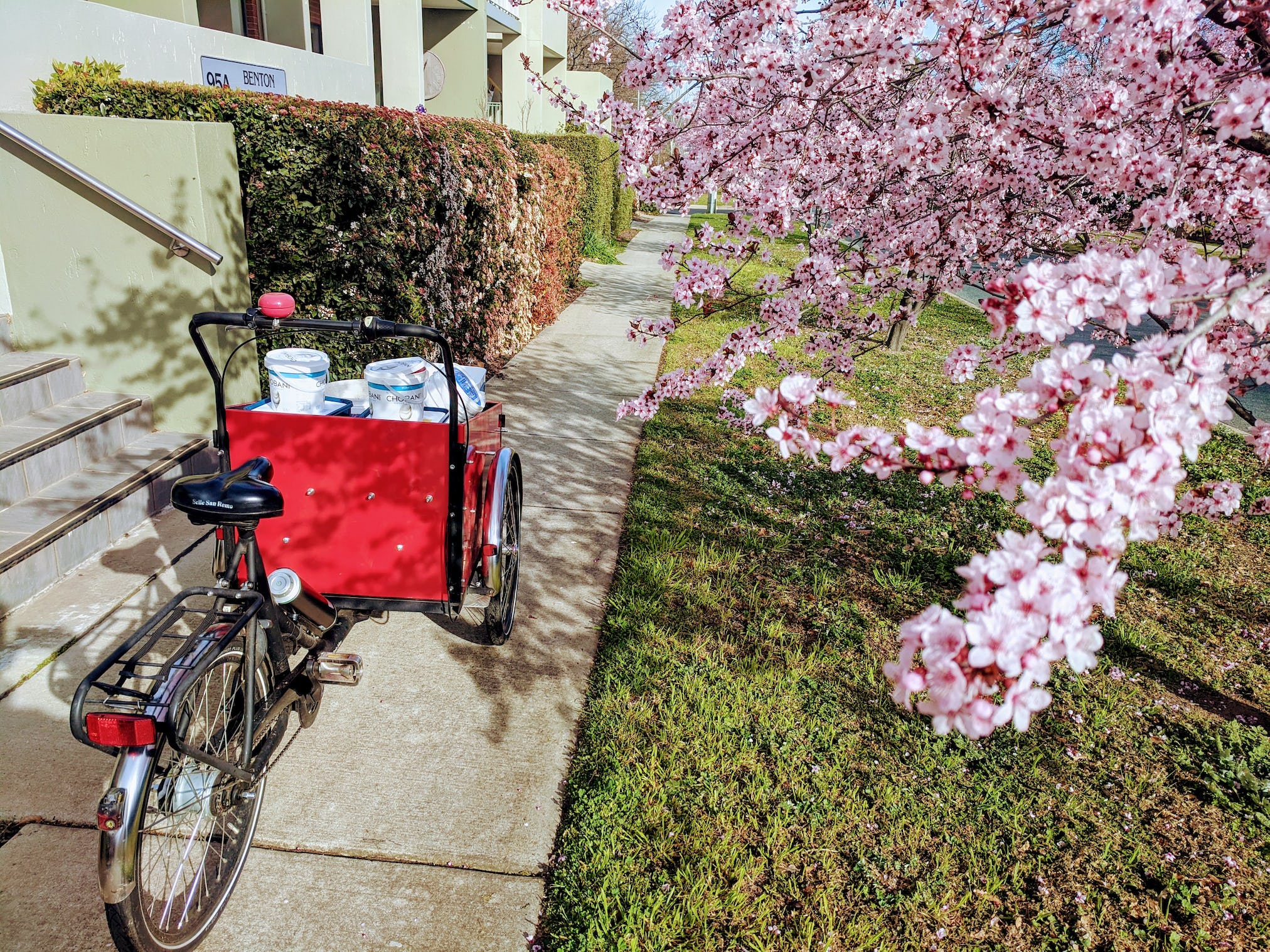 Where does your compost end up?

We give it away for free. We're taking in a lot of food waste, easily a tonne or so every few months. We've probably done 10 tonnes this year and we're starting to take in more. We really focus on that front end, the kind of collecting up of the waste. And everybody thinks that you're going to get a whole lot of compost out of that, but you actually get less compost than you're expecting because you've got to remember that the fruit and veggie scraps are 80% water. That kind of steams off and is lost to the atmosphere, which is fine, but what you do get in the end is a high value carbon amendment that you can use in soils.

We can then give that away. Sometimes we give it back to the householders who have given us the kitchen scraps. And, if we ever have too much, we [donate it] to a community garden or someone who's doing something interesting in the community with growing plants. We're hoping that people will see the benefit in paying for the service just in terms of getting that waste out of the landfill, but then have this generalised community benefit from different urban greening projects. 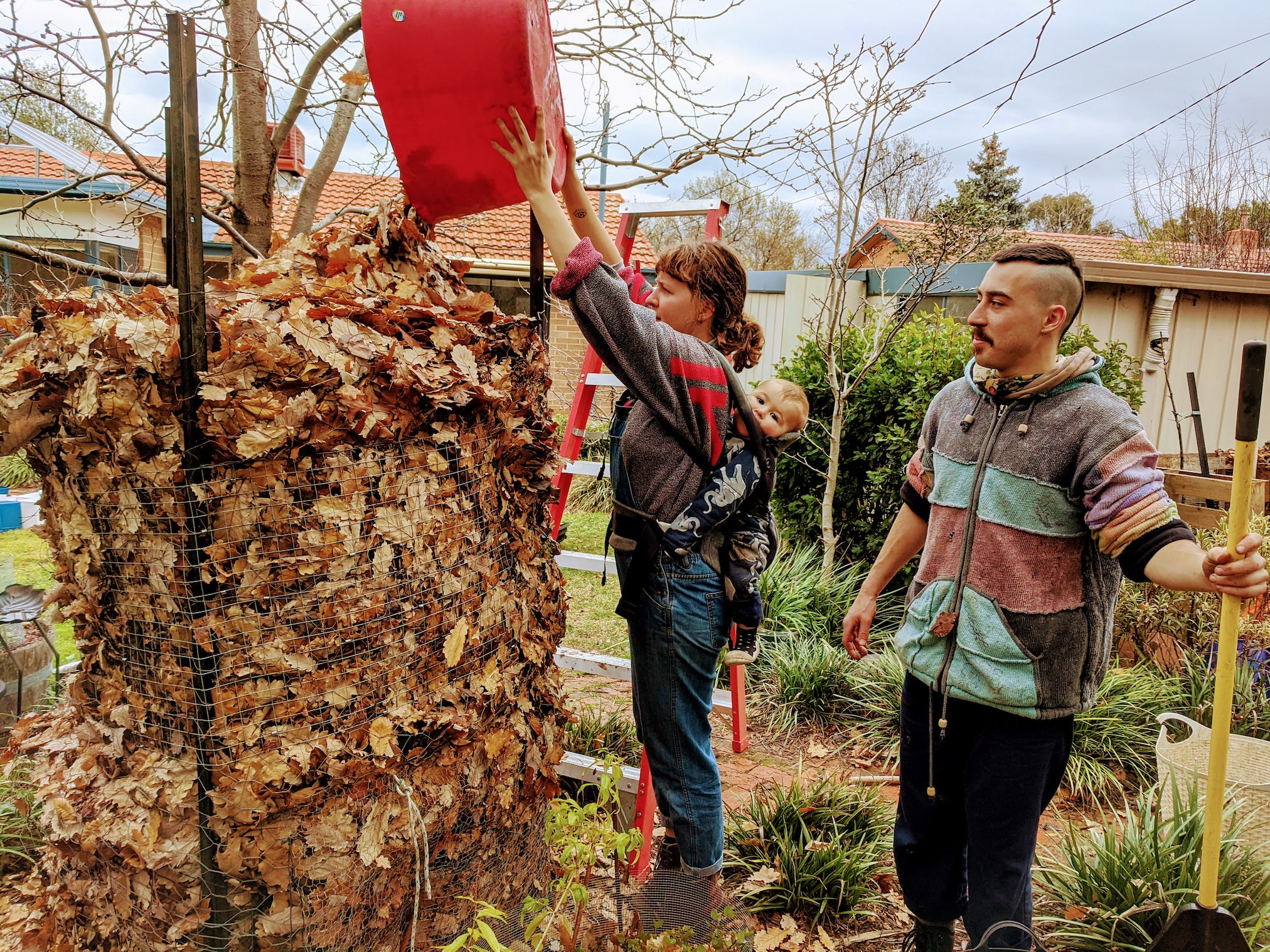